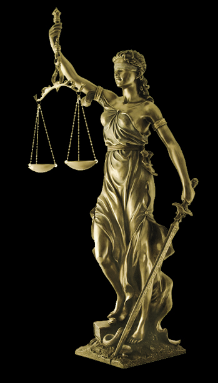 Law is a system of rules created and enforced through social or governmental institutions to regulate behavior, with its precise definition a matter of longstanding debate. It has been variously described as a science and the art of justice. State-enforced laws can be made by a group legislature or by a single legislator, resulting in statutes; by the executive through decrees and regulations; or established by judges through precedent, usually in common law jurisdictions. Private individuals may create legally binding contracts, including arbitration agreements that adopt alternative ways of resolving disputes to standard court litigation. The creation of laws themselves may be influenced by a constitution, written or tacit, and the rights encoded therein. The law shapes politics, economics, history and society in various ways and serves as a mediator of relations between people.

A license (American English) or licence (British English) is an official permission or permit to do,...

Justice, in its broadest sense, is the principle that people receive that which they deserve, with th...

Copyright law is unique in the greater intellectual property regime, as it protects original expressi...

treated in Chemerinsky on Constitutional Law - The Structure of Government

This course will highlight the construction and interpretation of the U.S. Constitution through the c...

This class deals with the business law topics that appear on the CPA exam: Agency, Contracts, Debtor-...

In recent years, the international tax planning strategies of multinationals have become a source of...

This six-week course titled Doing Business in Europe is the second in a series of three exploring som...

International Law in Action explains the functions of each international court and tribunal present i...

Being a successful FinTech firm requires more than just great technology; it also requires an underst...

treated in Introduction to Intellectual Property

Intellectual property is the currency of the tech world, with the world’s most valuable intellectual...

Have you ever wondered which legal rules are applicable to cross-border EU road transport? Are you in...

treated in International Humanitarian Law in Theory and Practice

“International Humanitarian Law in Theory and Practice” is the first MOOC of the Kalshoven-Gieskes Fo...

About this Course This six-week course titled Competing in Europe is the third in a series of three...