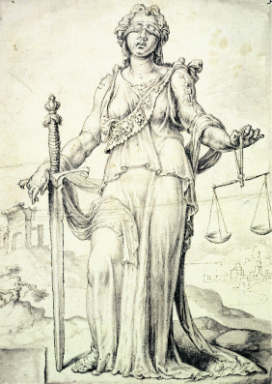 Justice, in its broadest sense, is the principle that people receive that which they deserve, with the interpretation of what then constitutes "deserving" being impacted upon by numerous fields, with many differing viewpoints and perspectives, including the concepts of moral correctness based on ethics, rationality, law, religion, equity and fairness. Consequently, the application of justice differs in every culture. Early theories of justice were set out by the Ancient Greek philosophers Plato in his work The Republic, and Aristotle in his Nicomachean Ethics. Throughout history various theories have been established. Advocates of divine command theory argue that justice issues from God. In the 1600s, theorists like John Locke argued for the theory of natural law. Thinkers in the social contract tradition argued that justice is derived from the mutual agreement of everyone concerned.

Law is a system of rules created and enforced through social or governmental institutions to regulate...