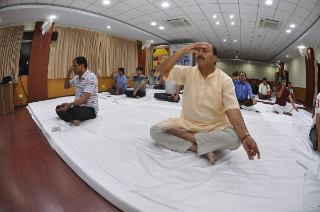 Pranayama is the practice of breath control in yoga. In modern yoga as exercise, it consists of synchronising the breath with movements between asanas, but is also a distinct breathing exercise on its own, usually practised after asanas. In texts like the Bhagavad Gita and the Yoga Sutras of Patanjali, and later in Hatha yoga texts, it meant the complete suspension of breathing.

Breathing (or ventilation) is the process of moving air into and out of the lungs to facilitate gas e...

Dive into breathing techniques that are approved by ancient traditions, by modern science and by mill...