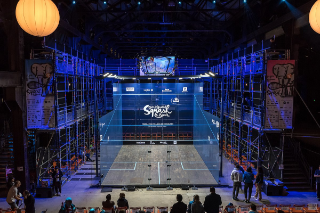 Squash is a racket and ball sport played by two players in a four-walled court with a small, hollow rubber ball. The players alternate in striking the ball with their rackets onto the playable surfaces of the four walls of the court. The objective of the game is to hit the ball in such a way that the opponent is not able to play a valid return. There are about 20 million people who play squash regularly world-wide in over 185 countries. The governing body of Squash, the World Squash Federation (WSF), is recognized by the International Olympic Committee (IOC), but the sport is not part of the Olympic Games, despite a number of applications. Supporters continue to lobby for its incorporation in a future Olympic program. The Professional Squash Association (PSA) organizes the pro tour.

Sport includes all forms of competitive physical activity or games which, through casual or organized...

has official Rules of Squash