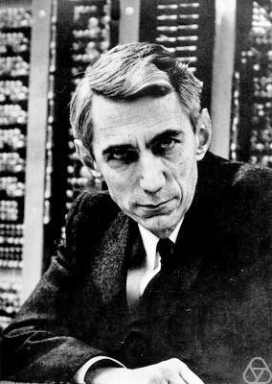 Claude Elwood Shannon (April 30, 1916 – February 24, 2001) was an American mathematician, electrical engineer, and cryptographer known as "the father of information theory". Shannon is noted for having founded information theory with a landmark paper, "A Mathematical Theory of Communication", which he published in 1948. He is also well known for founding digital circuit design theory in 1937, when—as a 21-year-old master's degree student at the Massachusetts Institute of Technology (MIT)—he wrote his thesis demonstrating that electrical applications of Boolean algebra could construct any logical numerical relationship. Shannon contributed to the field of cryptanalysis for national defence during World War II, including his fundamental work on codebreaking and secure telecommunications.

Information theory is the scientific study of the quantification, storage, and communication of digit...

Shannon, who died in 2001, is regarded as one of the greatest electrical engineering heroes of all ti...

created | expert on A mathematical theory of communication

The recent development of various methods of modulation such as PCM and PPM which exchange bandwidth...