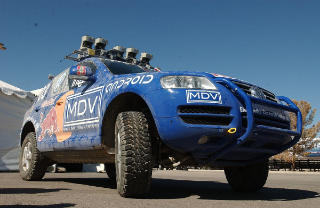 In computational geometry, simultaneous localization and mapping (SLAM) is the computational problem of constructing or updating a map of an unknown environment while simultaneously keeping track of an agent's location within it. While this initially appears to be a chicken-and-egg problem there are several algorithms known for solving it, at least approximately, in tractable time for certain environments. Popular approximate solution methods include the particle filter, extended Kalman filter, Covariance intersection, and GraphSLAM. SLAM algorithms are used in navigation, robotic mapping and odometry for virtual reality or augmented reality. SLAM algorithms are tailored to the available resources, hence not aimed at perfection, but at operational compliance.

Robotics is an interdisciplinary research area at the interface of computer science and engineering....

treated in Simultaneous Localisation and Mapping (SLAM): Part I The Essential Algorithms

treated in Simultaneous Localisation and Mapping (SLAM): Part II State of the Art