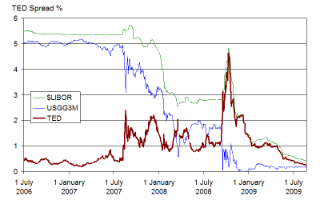 The financial crisis of 2007–2008, also known as the global financial crisis (GFC), was a severe worldwide financial crisis. Excessive risk-taking by banks combined with the bursting of the United States housing bubble caused the values of securities tied to U.S. real estate to plummet, damaging financial institutions globally, culminating with the bankruptcy of Lehman Brothers on September 15, 2008, and an international banking crisis. The crisis sparked the Great Recession, which, at the time, was the most severe global recession since the Great Depression. It was also followed by the European debt crisis, which began with a deficit in Greece in late 2009, and the 2008–2011 Icelandic financial crisis, which involved the bank failure of all three of the major banks in Iceland and, relative to the size of its economy, was the largest economic collapse suffered by any country in economic history.

treated in The Big Short

The Big Short is a 2015 American biographical comedy-drama film directed by Adam McKay. Written by Mc...

treated in The Big Short: Inside the Doomsday Machine

The author examines the causes of the U.S. stock market crash of 2008 and its relation to overpriced...