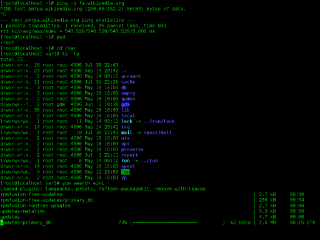 A command-line interface (CLI) processes commands to a computer program in the form of lines of text. The program which handles the interface is called a command-line interpreter or command-line processor. Operating systems implement a command-line interface in a shell for interactive access to operating system functions or services. Such access was primarily provided to users by computer terminals starting in the mid-1960s, and continued to be used throughout the 1970s and 1980s on VAX/VMS, Unix systems and personal computer systems including DOS, CP/M and Apple DOS. Today, many users rely upon graphical user interfaces and menu-driven interactions. However, some programming and maintenance tasks may not have a graphical user interface and may still use a command line.

In computing, a shell is a computer program which exposes an operating system's services to a human u...

treated in Missing Semester of Your CS Education

Classes teach you all about advanced topics within CS, from operating systems to machine learning, bu...