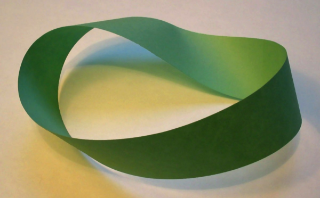 In mathematics, topology (from the Greek words τόπος, 'place, location', and λόγος, 'study') is concerned with the properties of a geometric object that are preserved under continuous deformations, such as stretching, twisting, crumpling and bending, but not tearing or gluing. A topological space is a set endowed with a structure, called a topology, which allows defining continuous deformation of subspaces, and, more generally, all kinds of continuity. Euclidean spaces, and, more generally, metric spaces are examples of a topological space, as any distance or metric defines a topology. The deformations that are considered in topology are homeomorphisms and homotopies. A property that is invariant under such deformations is a topological property.

In mathematics, homology is a general way of associating a sequence of algebraic objects, such as abe...

In applied mathematics, topological data analysis (TDA) is an approach to the analysis of datasets us...