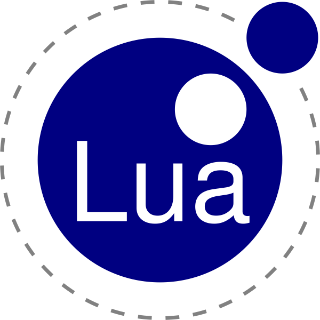 Lua (LOO-ə; from Portuguese: lua [ˈlu.(w)ɐ] meaning moon) is a lightweight, high-level, multi-paradigm programming language designed primarily for embedded use in applications. Lua is cross-platform, since the interpreter of compiled bytecode is written in ANSI C, and Lua has a relatively simple C API to embed it into applications. Lua was originally designed in 1993 as a language for extending software applications to meet the increasing demand for customization at the time. It provided the basic facilities of most procedural programming languages, but more complicated or domain-specific features were not included; rather, it included mechanisms for extending the language, allowing programmers to implement such features. As Lua was intended to be a general embeddable extension language, the designers of Lua focused on improving its speed, portability, extensibility, and ease-of-use in development.

treated in The evolution of an extension language: a history of Lua

Since its inception, in 1993, the Lua programming language has gone far beyond our most optimistic ex...