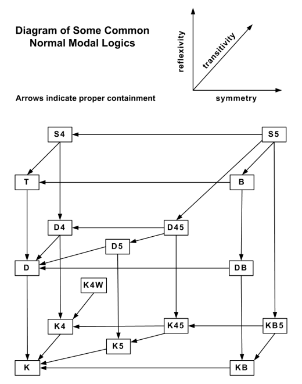 Modal logic is a collection of formal systems originally developed and still widely used to represent statements about necessity and possibility. For instance, the modal formula ◻P → ◊P can be read as "if P is necessary, then it is also possible". This formula is widely regarded as valid when necessity and possibility are understood with respect to knowledge, as in epistemic modal logic. The first modal axiomatic systems were developed by C. I. Lewis in 1912, building on an informal tradition stretching back to Aristotle. The relational semantics for modal logic was developed by Arthur Prior, Jaakko Hintikka, and Saul Kripke in the mid twentieth century. In this semantics, formulas are assigned truth values relative to a possible world.

A modal is an expression (like ‘necessarily’ or ‘possibly’) that is used to qualify the truth of a ju...

treated in Intelligent Agents I

The objective of this course is to introduce students to knowledge representation and reasoning metho...