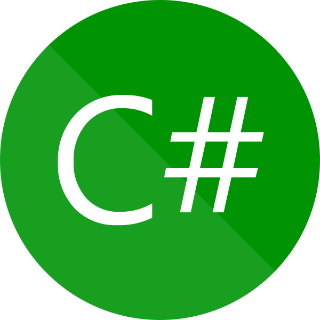 C# (pronounced see sharp, like the musical note C♯, but written with the number sign) is a general-purpose, multi-paradigm programming language encompassing strong typing, lexically scoped, imperative, declarative, functional, generic, object-oriented (class-based), and component-oriented programming disciplines. It was developed around 2000 by Microsoft as part of its .NET initiative and later approved as an international standard by Ecma (ECMA-334) in 2002 and ISO (ISO/IEC 23270) in 2003. Mono is the name of the free and open-source project to develop a compiler and runtime for the language. C# is one of the programming languages designed for the Common Language Infrastructure (CLI). C# was designed by Anders Hejlsberg, and its development team is currently led by Mads Torgersen. The most recent version is 8.0, which was released in 2019 alongside Visual Studio 2019 version 16.3.

ASP.NET Core is a free and open-source web framework and successor to ASP.NET, developed by Microsoft...

A Source Generator is a piece of code that runs during compilation and can inspect your program to pr...

.NET Core is a free and open-source, managed computer software framework for Windows, Linux, and macO...

.NET Framework (pronounced as "dot net") is a software framework developed by Microsoft that runs pri...

parent of Web scraping in C#

parent of Monads in C#

Beginning with C# 9, you use the record keyword to define a reference type that provides built-in fun...

Expression trees represent code in a tree-like data structure, where each node is an expression, for...

Midori (which means green in Japanese) was the code name for a managed code operating system being de...

An interactive in-browser tutorial to learn .NET using the C# programming language. No downloads or i...

Learn C# in your browser, and get started with your own development environment

Use these resources for detailed information on key C# language features and features accessible to C...

treated in Hidden Features of C#

We, C# developers, all know the basics of C#. I mean declarations, conditionals, loops, operators, et...

treated in How to Use F# from C#

F# is a functional programming language that compiles to .NET Intermediate Language (IL). C# is becom...