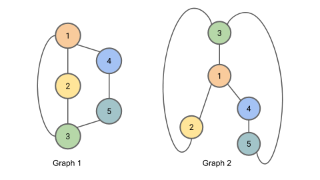 The graph isomorphism problem is the computational problem of determining whether two finite graphs a...